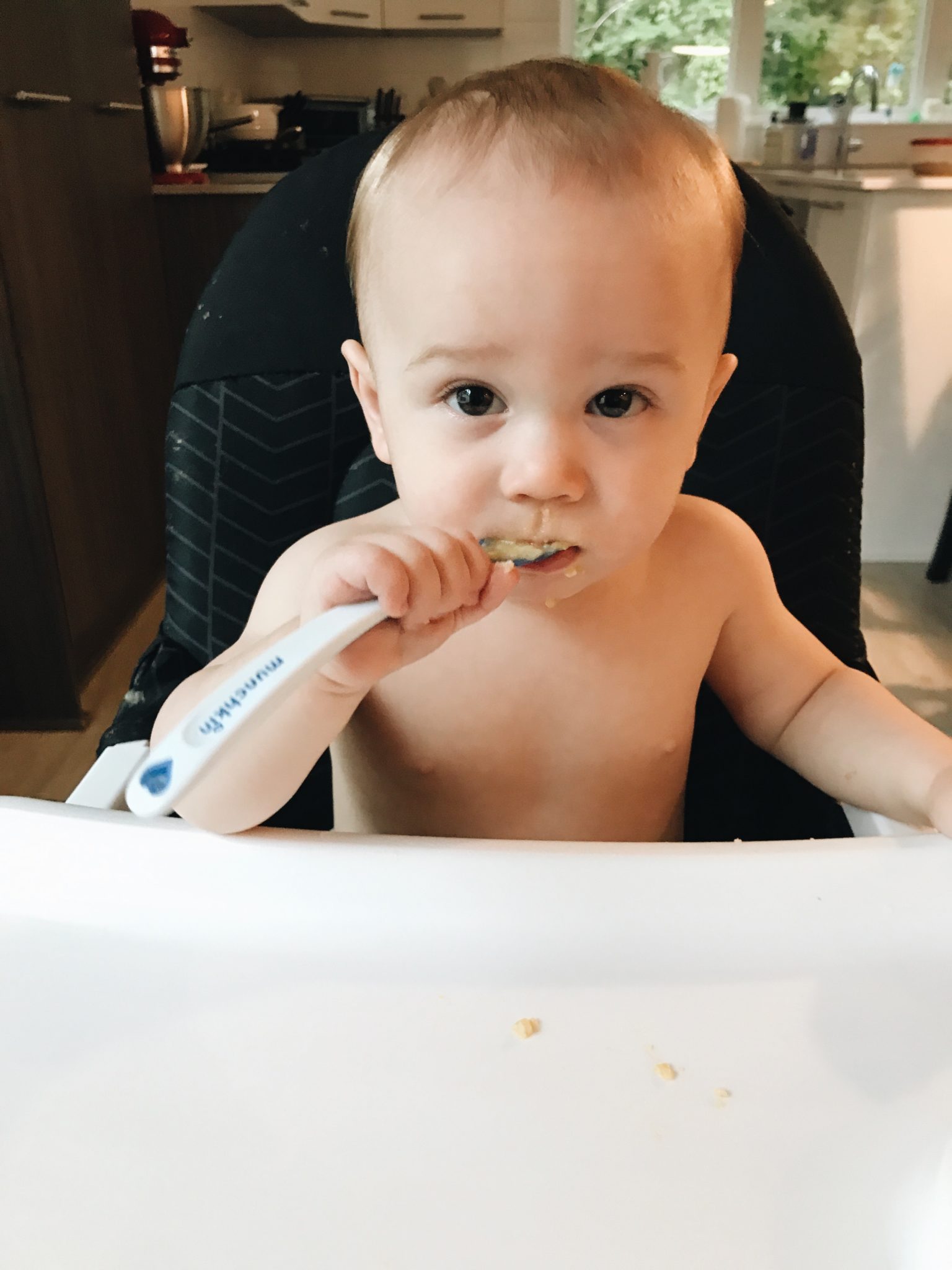 I’ve gotten a bunch of questions lately about Owen’s schedule as well as what he’s eating so I wanted to put together a quick post on it!

To start I’ll say that we’re not quuiiiitte on a guaranteed schedule and there’s absolutely day to day variation (especially when we throw travel into the mix!) but in general, here’s what a day in Owen’s life looks like:

8:00 – 8:10 am: Finger foods – usually cut up fruit, a pouch (he loves the Sprout ones most) or some puffs.  Nothing too big, he usually eats his breakfast after his first nap.

8:30 – 10:00 am: Nap – on a good day this nap is an hour and 15 minutes, on an okay day it’s an hour and on a terrible day it’s 20 minutes!  Haha.  I would say this is his most reliable nap though, I can always usually count on an hour during which time I’ll make and shoot a recipe and get his breakfast ready (if I haven’t already made one over the weekend for the week)

10-10:30 am: Breakfast – anywhere between 10 and 10:30 he’ll have breakfast.  His favorite of late has been oatmeal.  This week is peanut butter banana cinnamon oats.  Last week was apple cinnamon.  He also loved these sugar-free apple carrot banana muffins spread with peanut butter

12:00 – 12:30 pm: Naptime – he’ll go down for his next nap between 12 and 12:30.  He makes it between 2-3 hours awake in between naps during the day so a lot of the time it depends on his first nap when he’ll go down for this one.  But I’ve been trying to keep the naptimes consistently 8:30 and 12/12:30pm each day (even if he plays in his crib and doesn’t sleep the whole time) in the hopes that he’ll adjust to that.  Again on a good day this nap can be 2 hours, on an okay day it’s an hour and a half and on a bad day it’s 45 minutes.  This is the nap we’ve struggled with the most in the past month or so but it’s usually always at least an hour.

2:00-2:30 pm: Lunch – finger foods like this cheesy whole wheat veggie risotto, cut up sweet potato, eggs, black beans, avocado or hummus toast, peas, etc.  Whatever I’ve made for him for that week (or whatever I can come up with!)

5:00 pm: Dinner – this is the least dependable meal because it’s usually right around the time Daddy is getting home and everyone gets excited and distracted.  Sometimes he’s really interested in it and other times he wants nothing to do with it.  It’s more often a pouch and some puffs but when we really have our acts together it’ll be foods similar to lunch

6:45 – 7:00 pm: This varies depending on how long he played in the bath but immediately following his bath we get in pjs and give him his last bottle of the day (always 8 ounces)

7:30 – 8:00 pm: Bedtime – he’ll sometimes fall asleep while finishing the last of his bottle.  Other times not so we’ll do books and songs and then into the crib.  He’s consistently sleeping through the night now so this is it until the next morning when he wakes up and we start it all over again 🙂

A few other questions I’ve gotten from you guys that I wanted to address:

And I think that’s about it!  If you have any questions on anything feel free to leave it in the comments!