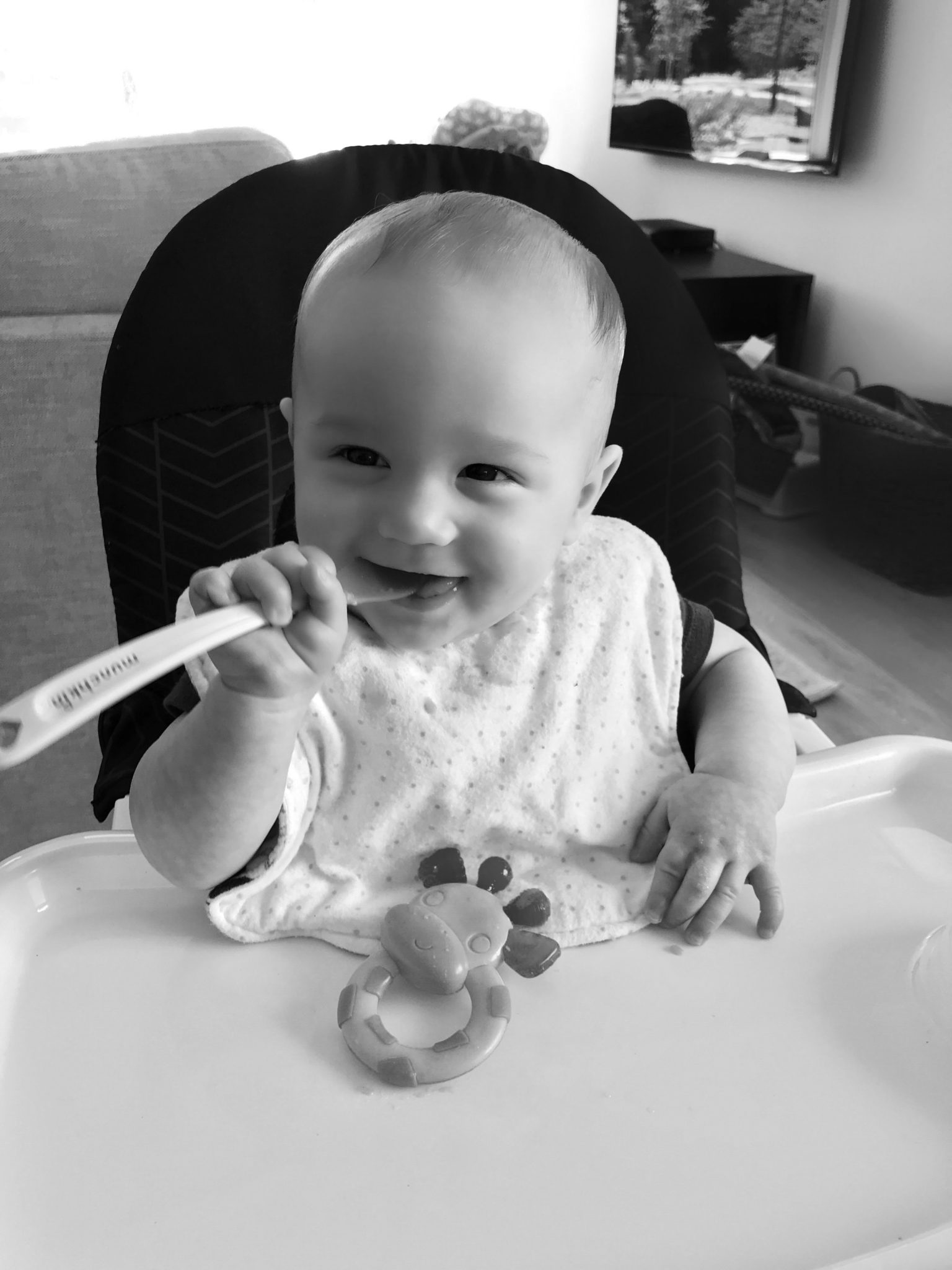 The other week when I posted a picture of Owen eating, I got a lot of direct messages about what I’m feeding him and where we started.

We introduced food to Owen at around 5 1/2 months or so.  We made the decision to introduce food at this point for two reasons:

We started first with pureed sweet potatoes.  We did that once a day for about 2-3 days (to ensure no allergic reaction signs popped up) then we introduced pureed apples.  We repeated that pattern, introducing new foods every 2-3 days (he’s had pears, peaches, blueberries, apricots, bananas, avocados, spinach, peas, green beans, pumpkin,  broccoli, carrots…and probably more that I’m just forgetting at this point!).  By day 3, I would offer him pureed foods about 3 times a day (around 1 hour after his milk feeding).  I also started mixing in rice cereal with 2 of his “meals” on about day 3 or so.

As you can see – he’s not adding too much.  Other than sleeping through the night now, he’s still nursing/drinking bottles the same as he had been.  In terms of amounts, these are generally what I’ll offer him.  Sometimes he’ll eat all and more, other times he’ll take a few bites and be done.  I go with his cues, never forcing him to eat more or less.

In terms of recipes, I’ve mostly been relying on the books my sister-in-law gave me that she used with her kids.  Like the ones I shared on my Instagram stories, they’re super simple right now.  The most complicated they’ve gotten has been to mix different fruits with different vegetables.  Once I start introducing more complicated meals, I’ll be happy to post those recipes if there’s interest!

One last note before I sign off on this post.  I know BLW is a big question on a lot of mom’s minds these days so I did want to address it.

Because we were introducing food to Owen on the earlier side developmentally, and because we were doing it to help supplement the meals he was missing throughout the night (he’s always been smaller and I didn’t want him to fall off his growth curve), I didn’t consider BLW to be right for us at that point.

There are a few important things to consider before beginning BLW.

First off, your child needs to have the appropriate musculature development to support this approach.  Before considering it, your child should at the very least be able to:

Secondly, BLW is not necessarily going to get extra nutrition into your child, as it’s really them leading the show.  To quote babyledweaning.com:

It’s ‘baby-led’ in the sense that you let them do what they need to do while they’re learning, and as the parent you resist the urge to get wound up in knots about how much they’re eating, whether they like the food you thought they’d like and whether it’s smushed into the nearest curtain. The main thing is… it’s all good clean (messy) fun.

So they very well may take in nutrition, but it’s no guarantee (as is evidenced by the comment above that it could end up mushed into the nearest curtain).  It’s important to remember that yes, you want your baby to explore and have fun with food, but also that he or she has real nutritional needs.  In general, when you first begin introducing food (whether with purees or BLW), your nursing/bottle feeding routine should remain more or less unchanged in order to meet those needs.

It’s also important to note that at around 6 months, the iron stores a baby is born with have nearly depleted.  With BLW, you’re likely not providing your child iron-fortified cereal (a typical first food for babies), so it’s important to either ensure you’re working to include high-iron foods (such as eggs, lentils, ground beef) or to talk to your pediatrician about the need for supplementation.

All of that said, I do think there are important benefits to baby-lead weaning such as allowing babies to tune into their internal hunger and fullness cues!  I’m by no means trying to discourage interested parents from utilizing BLW, it just didn’t happen to be the right next step for us.  For those that are interested in it, I would just say, do your research to make sure both you and your baby are ready for it and to ensure it’s being carried out correctly.