these easy french toast roll ups are both kid & adult friendly, can be filled with whatever you want and make an easy weekday breakfast or on-the-go snack.

If you missed my IGTV video on this (or just didn’t have time to watch it all!) I wanted to put together a post for you breaking down the recipe because it’s one of my favorite easy breakfast and on-the-go snack options for Owen (I’ve also written out the full recipe below so feel free to use that instead!)

They’re so quick to make and they’re totally customizable. You can fill them with whatever you want (think: nutella and strawberries, almond butter and raspberries, peanut butter & jelly…the sky is truly the limit!)

All you have to do is:

Take a slice of whole wheat bread (day old or stale works best!) then the crusts off all the edge so you’re left with a square of bread, like this:

Then, you take a rolling pin and carefully roll it out as thinly as you can:

Next, you spread the entire slice of bread with a thin layer of peanut butter:

Followed by a layer of thinly sliced bananas along the outside edge:

Next, a sprinkling of cinnamon:

Now, just carefully roll it up (starting at the banana side!):

Then into the egg/milk/cinnamon mixture goes the roll-up!

Cook on a greased griddle or in a non-stick sauté pan for 1-2 minutes per side (rolling around so you get each side):

And that’s it! You’re done! Let your kids have at it 🙂

If you don’t want to take the time to make them into roll-ups, you can absolutely just take two slices of bread, spread each side with a little peanut butter, top with thinly sliced bananas, sandwich the two slices together and dip the whole sandwich in your french toast batter!

And if you do ever get the time, definitely check out the video – I try to give helpful tips/tricks/hints in all of them! 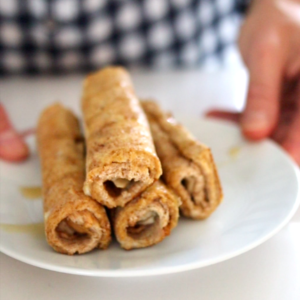