We had a big day!

We were up early and out the house to take this little nugget back to her mom’s house! 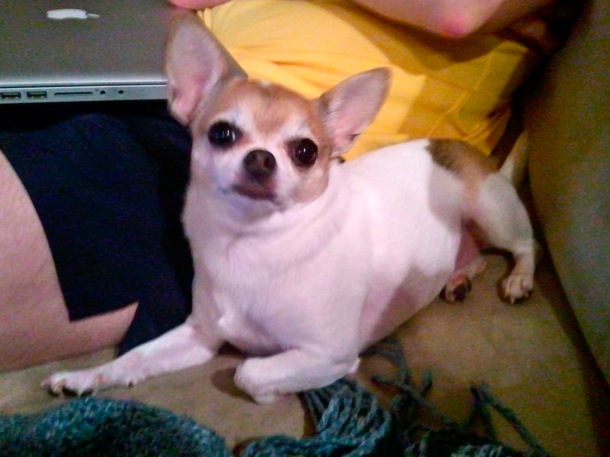 I’m going to miss her! 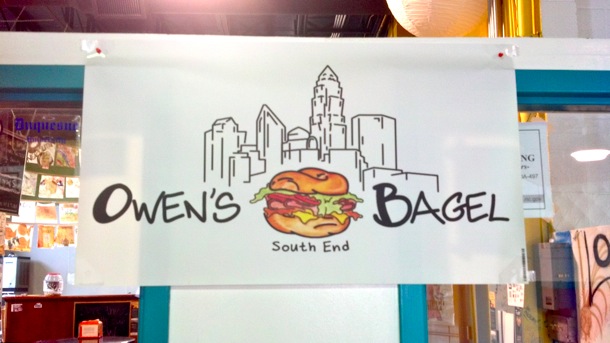 I got a wheat bagel with egg and ham and it totally hit the spot. 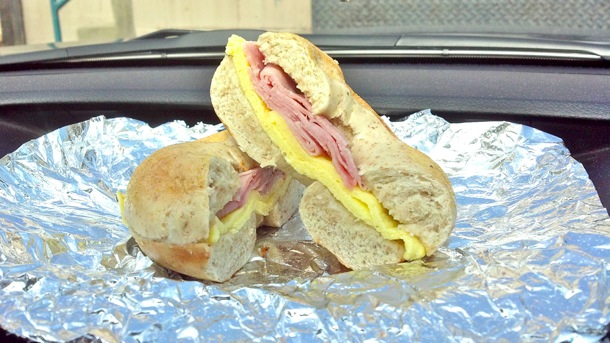 Plus an iced coffee with soymilk (and an Starbucks Via Iced Coffee sample…too sweet for me) to go alongside: 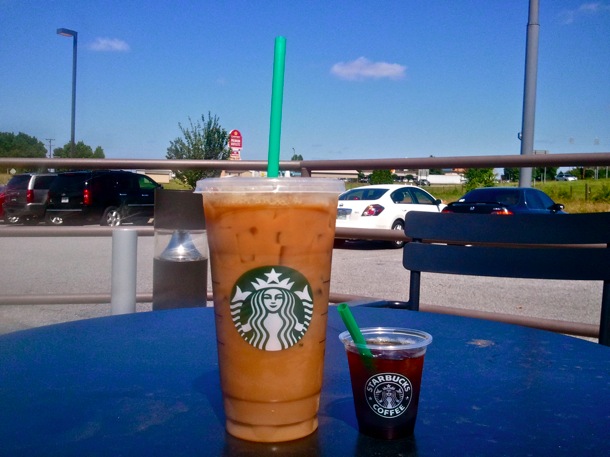 We met my sister at an Arby’s in South Carolina that was halfway from both Atlanta and North Carolina.  I think she was happy to have Clara back! 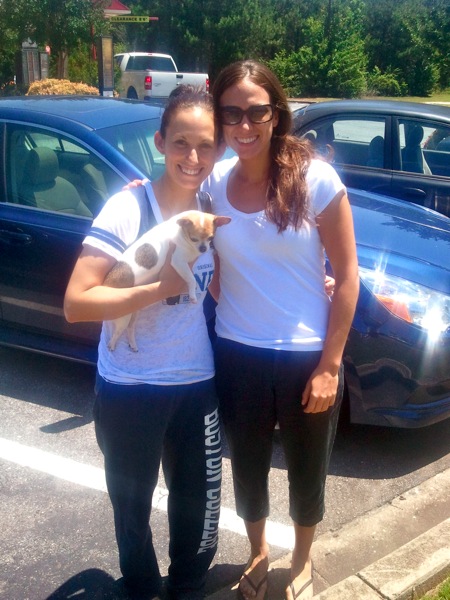 Since we were already at Arby’s and it was nearly 1pm, Chad and I decided it would be as good a place as any to grab some lunch since we had plans to stop at the Gaffney Outlets on the way home. 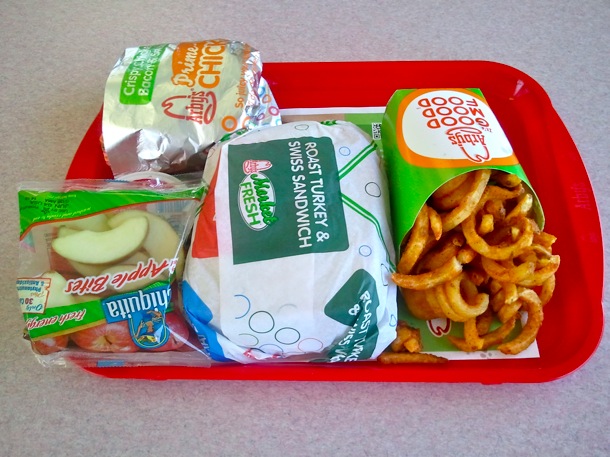 I LOVE their curly fries. 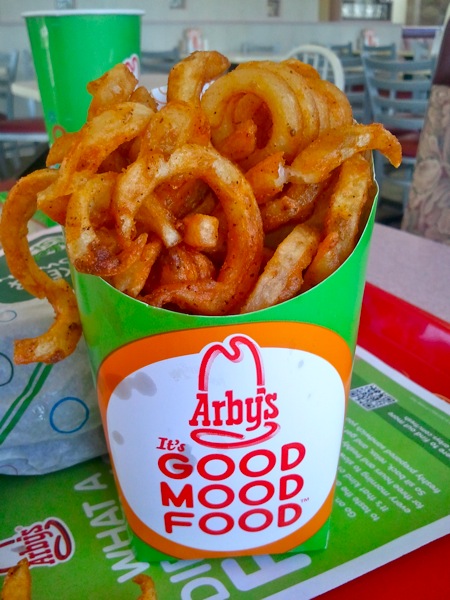 And while Chad got them, I somehow managed to stay away from them and enjoyed a decently healthy meal for a fast food place! 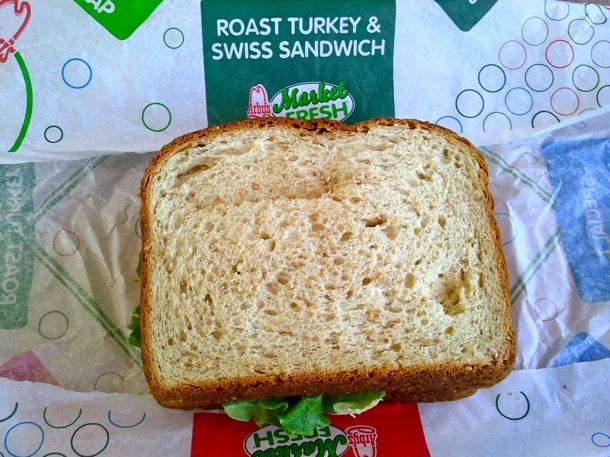 I chose the roast turkey and swiss sandwich on whole wheat which I really enjoyed.  The sandwich was HUGE and really filling! 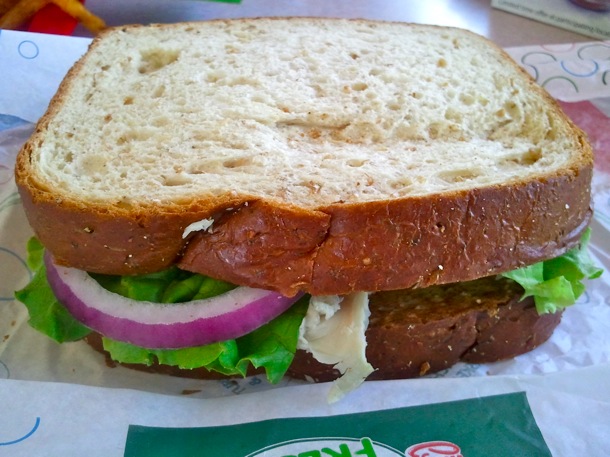 And some crispy apple bites to go alongside – 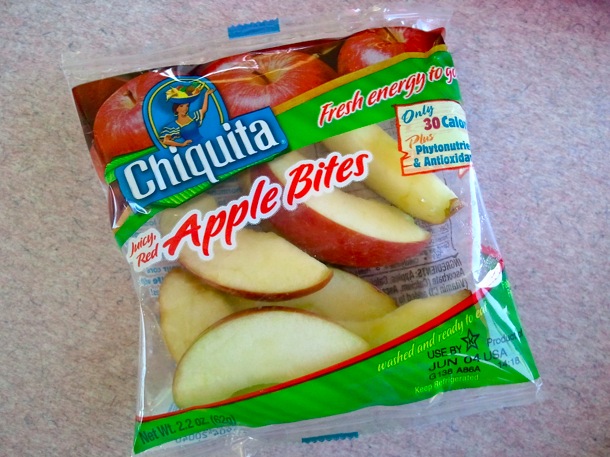 The apples came with some strawberry yogurt to dip them in…but for something that really could’ve just been yogurt + strawberry puree, the ingredient list was a little too long for my liking so I tossed it aside. 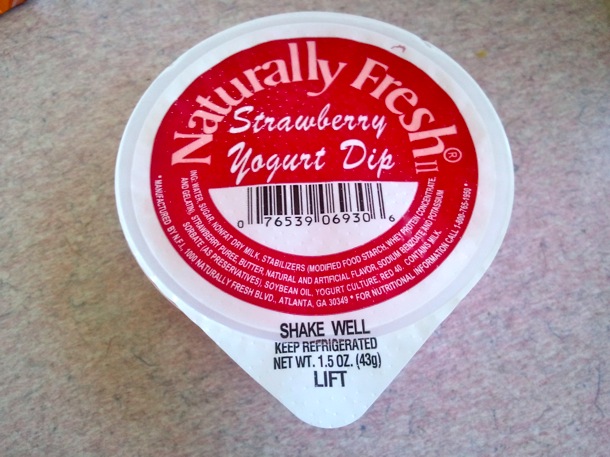 I also thought it was kinda cool to see this on the table: 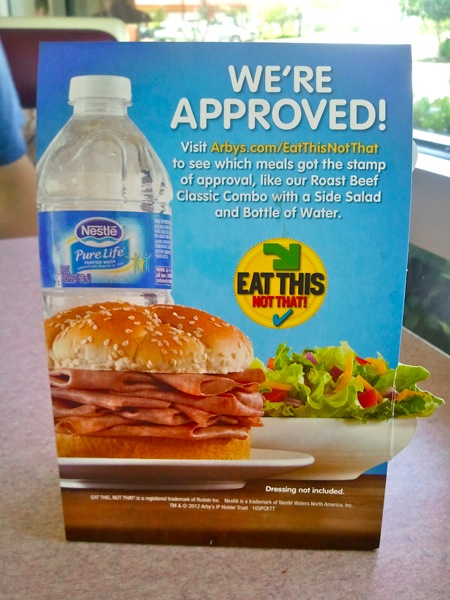 Good to know if you’re traveling that you can check out Arbys.com/EatThisNotThat for healthy options!

Then we hit the outlets! 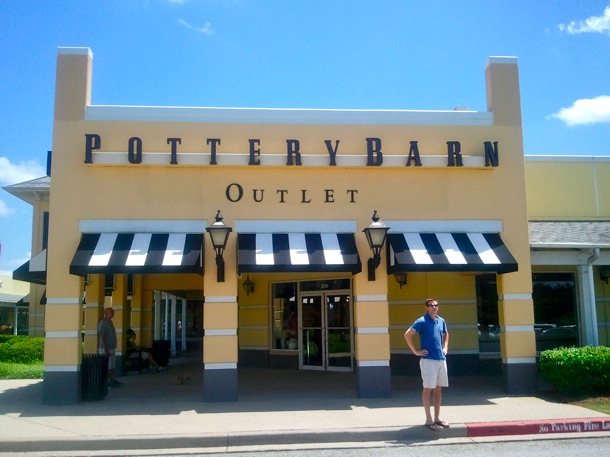 We managed to leave with just one bag…so I’d consider it a [financial] success!

We relaxed for a little while when we got home (well, I relaxed while Chad went for a 7 mile run) and then showered, dressed and headed out for a little date night! 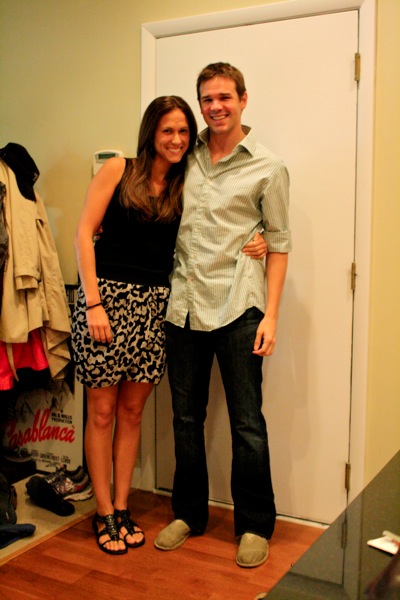 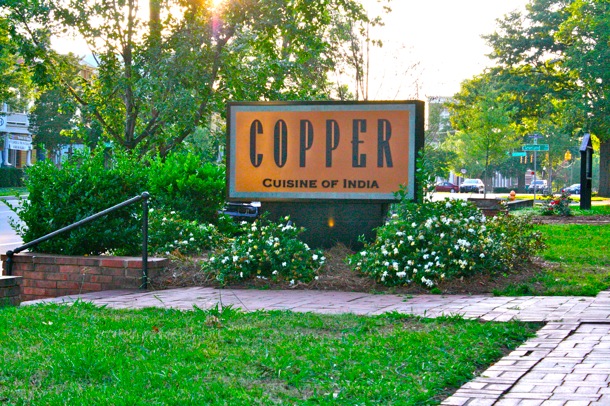 I started out with a class of cabernet: 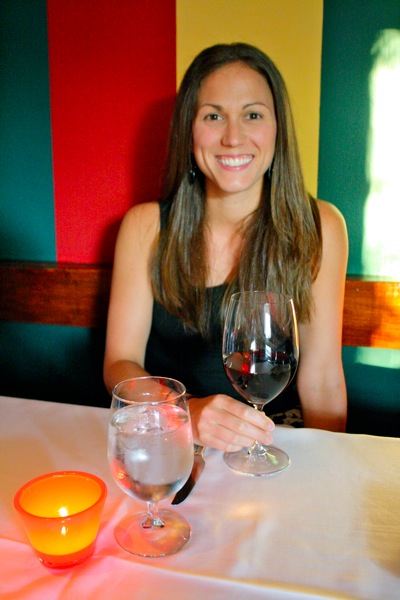 Some naan with 3 types of dipping sauce: 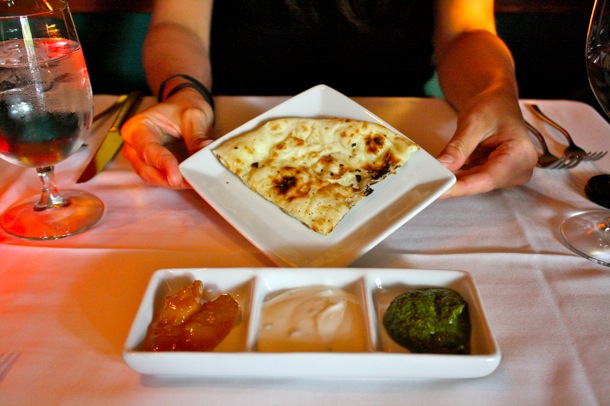 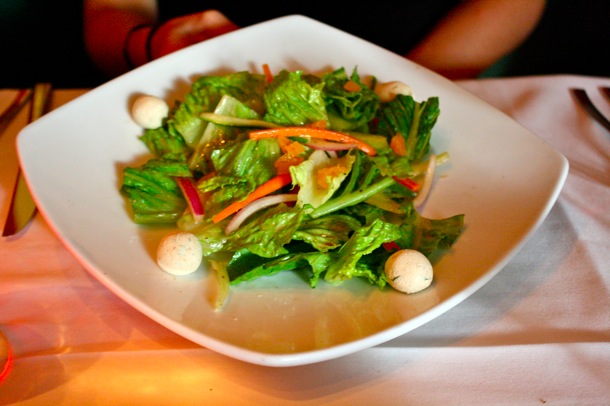 Then we both got the chicken tikka masala: 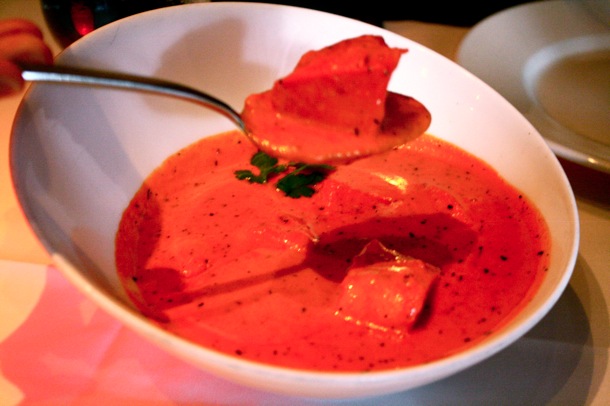 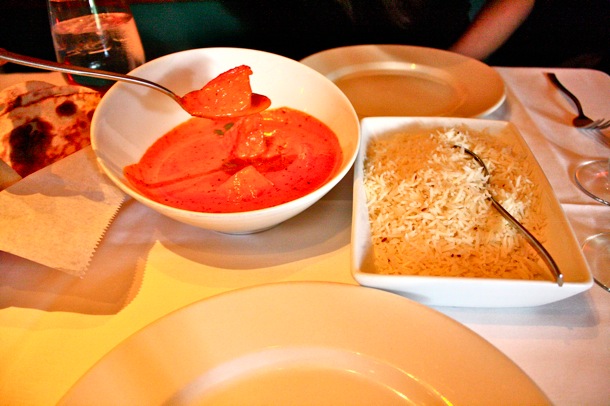 Despite this dish being one of the least healthy, I figure that it’s worth it to treat yourself once in a while – I go out to Indian restaurants about once a year, so I figure…when in Rome!

And oh my goodness was it ever worth it,

Alongside we got a bit more naan (plain and roti) for dipping: 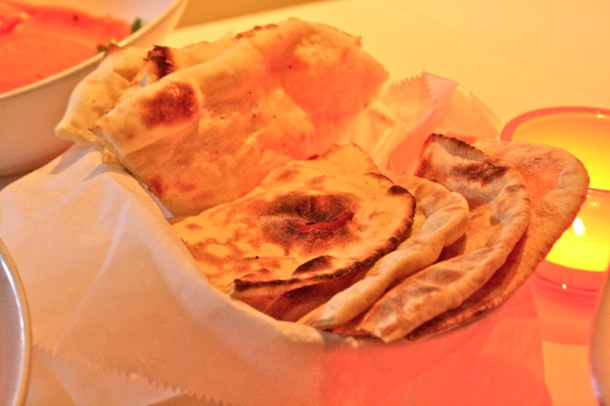 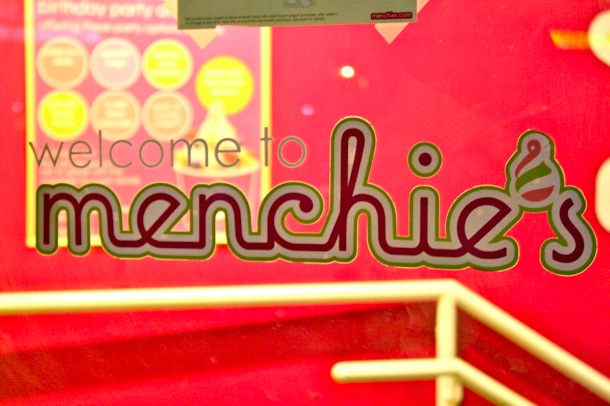 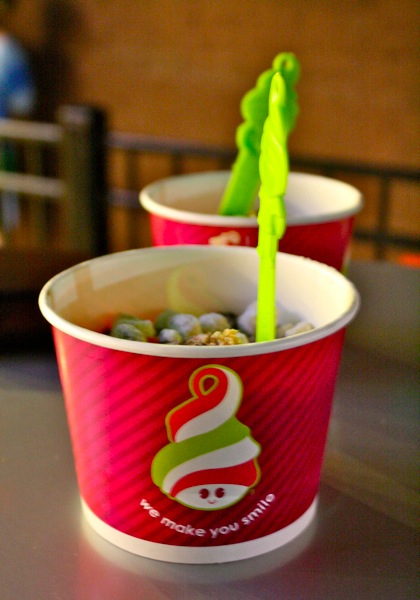 Perfect end to the evening!